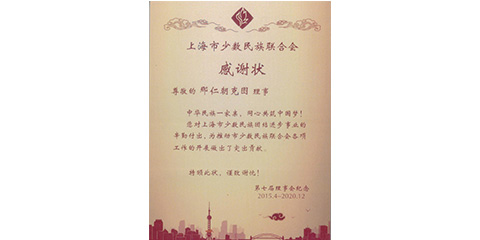 At 2:00 p.m. on December 13, 2020, the 8th Member Representative Conference of Shanghai Ethnic Minority Federation (SEMF)was held in the Auditorium of Shanghai CPPCC. Lawyer Na Ren Chaoktu of Shanghai Nuodi Law Firm was elected as the director of the 8th Council of SEMF and was awarded the Certificate of Appreciation by the 7th Council.

Mr. Zheng Gangmiao, the member of Shanghai Municipal Party Committee, minister of United Front Work Department, Deputy Secretary of the City CPPCC Party Group, Party Secretary of City Socialist College arrived at the conference and made an important speech. The Congress stressed the importance of building a strong sense of community among the Chinese nation, promoting the close unity of all ethnic groups like pomegranate seeds, and pushing the Chinese nation towards a more inclusive and cohesive community of shared future.