President Xi Jinping spoke highly on Wednesday of Macao's implementation of the "one country, two systems" policy and praised the achievements of Macao in the past 20 years. 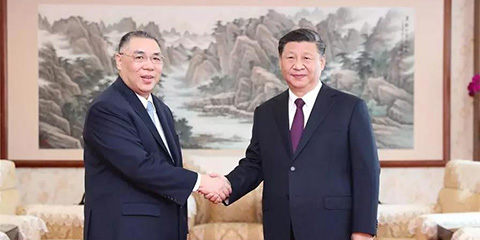 Xi, also general secretary of the Communist Party of China Central Committee and chairman of the Central Military Commission, made the remarks in a speech upon his arrival at the airport.

The president planned to attend a gathering on Friday marking the 20th anniversary of Macao's return to the motherland. He was also to be present at the inauguration ceremony for the fifth-term government of the Macao Special Administrative Region and inspect the SAR.

Xi extended warm congratulations and best wishes to Macao compatriots on the occasion.

he people of the whole nation and the central government are proud of Macao's achievements in the past two decades, Xi said. "It is worthwhile to sum up the experience and characteristics of Macao in faithfully implementing 'one country, two systems'," he said.

The president expressed willingness to communicate with people from all walks of life during his stay in the SAR.

In his speech, Xi recalled some of his previous visits to Macao, starting as early as June 2000, saying that he is not a stranger to city. This is Xi's sixth visit since Macao returned to the motherland.

Xi and his wife, Peng Liyuan, received a warm welcome from hundreds of students at the airport.

On Wednesday afternoon, Xi met with Chui Sai-on, chief executive of the Macao SAR, and praised his diligent work in the position over the past 10 years. 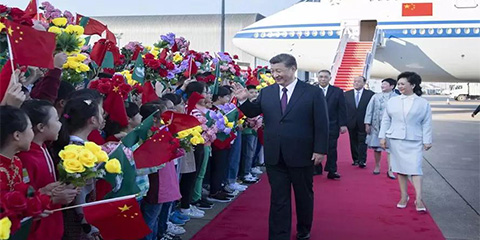 Xi said that under Chui's leadership, the Macao SAR government has fully and accurately implemented the "one country, two systems" policy and acted strictly in accordance with the Constitution and the Basic Law.

The SAR government has made great achievements in fields such as safeguarding national security, maintaining social stability, promoting economic development, improving the people's lives and enhancing exchanges with the mainland.

Xi said that the prosperity and stability of Macao have been consolidated and developed, and he added that the central government fully acknowledges the efforts made by Chui.

Xi encouraged Chui to continue his care for the development of the country and Macao, support the incoming chief executive of the Macao SAR and the new SAR government to administer the region in line with the law, and make more contributions to the practice of the "one country, two systems" policy.

On behalf of the Macao SAR government and Macao people, Chui expressed a warm welcome to Xi and Peng.

Chui expressed gratitude for the support of Xi and the central government for Macao and himself.

With the support of the central authorities, the Macao SAR government and people have made positive efforts to promote Macao's prosperity and stability as well as the diversification of Macao's economy, he said.